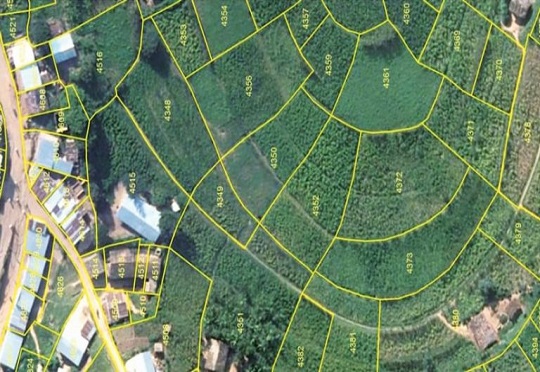 Begun in 2008, Rwanda’s land registration reform has fostered incremental improvements in the Rwanda land administration processes. The first version of LAIS helped support the initial collection and management of large amounts of land administration and legal data for the development of land-use plans at the national and district levels.

In collaboration with Kadaster International, RLMUA used the Esri ArcGIS to develop and deploy LAIS version 4.0, which is improving the current process of titling and certification of land throughout the country.

Over the last two decades, Rwanda has invested considerably in land administration. Most recently, the successful deployment of LAIS version 4.0 in 2019 and the adoption of Esri’s Land Administration Modernization Program (LAMP) have provided the country with advanced GIS technology and support to meet the evolving challenge of comprehensive land governance.

Esri’s LAMP is a grant program that allows resource-constrained countries and their cadastral agencies access to the Esri enterprise platform, supporting the upgrade to LAIS version 4.0 and mapping work.

“RLMUA got multiple benefits from implementing LAMP, such as providing better and [speedier] service delivery to the population, more consistent data; eliminated errors in land titles; and [provided] a better protection of the land titles [and] web map services, among others,” said Espérance Mukamana, director general and chief registrar of land titles, RLMUA.

The new system overcame technical challenges encountered in the previous LAIS versions by combining previously separated textual and GIS components into one system and better aligning with the current IT system’s security procedures. The new system also ensures alignment with the ISO 19152:2012 Land Administration Domain Model (LADM), which supports standardization and integration of land data.

LAIS version 4.0 now provides users with web access to up-to-date spatial data through mapping services, which can be shared seamlessly. It also integrates interactive national land data visualizations that share real-time statistics on land use through charts available on a central dashboard.

Additionally, the new system is enhancing transparency and providing users with the spatial tools and data they need to perform land-use analysis for their own land and, collectively, to better plan for the sustainable development of the country.

RLMUA has gained remarkable experience and results by using GIS for land management services, according to Mukamana, who says the technology has “led to a better understanding and implementation of the land management system and helped RLMUA achieve its targets efficiently.”

LAIS version 4.0 places Rwanda among the few countries on the continent with the level of advanced geospatial technology that can operationalize land administration and use capabilities while also enabling real-time monitoring of land rights and use for potential investments in the country. The entire system has proved to be a vital tool that informs decision-makers on any changes made to land-related transactions.

“This project represents a lighthouse for Africa,” said Sohail Elabd, Esri Global Business Development general manager, Middle East and Africa region.”Many governments are looking at ways to increase revenue through registration of land. Esri technology, provisioned through the LAMP, provides a set of out-of-the-box tools to do so. We are excited to be working with RLMUA to make this happen.”